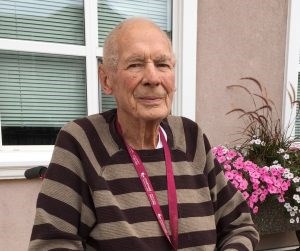 It is with great sadness that we announce the passing of a great husband, dad, grandpa, great-grandpa, brother, uncle and friend.

Howard was born in Wapella, Sask. into a large loving family before moving to B.C. where Kamloops became his home.

After various odd jobs at age 18, he signed up for military duty, as many young men did at the time. He served as a gunner in the 14th Field Division, Royal Canadian Army and was active from 1941 to 1945. Upon his return he married his wife, Agnes, of 40 years. They raised four children in Dallas. Howard retired as a conductor for CP Rail. He made many life-long friends there and saw them right up until his passing.

Howard had many hobbies, reading, gardening, camping, fishing, hunting, travelling and walking, to name a few. He was very active in his retirement years:  walking along Rivers Trail at Pioneer Park and MacArthur Island. He rarely missed a day of walking and in his 90’s he was still walking at TCC and using resistance machines. He always said, “you have to keep moving.” Howard was an avid Toronto Blue Jays fan and rarely missed a game.

He had a gentle understanding way about him and made those close to him feel special. Family was everything to him. He regularly had visits with his kids, grandkids, great grandkids, brothers, sisters, nieces, nephews and friends. Howard had a great sense of humour and enjoyed a long life. He never complained about anything and made the best of everything. Dad always saw the good in people and was non-judgemental. He was humble and thoughtful of others.

Predeceased by his wife Agnes in 1992 and siblings Eva, Francis, Hazel, Ethel, Margaret, Ted and Tom.

Flowers graciously declined. Donations can be made to Royal Canadian Legion, Branch 52, Kamloops.

A special thanks to Dr. Frankie Mah, staff at Chartwell (Renaissance) and Trinity Palliative Care and Agnes Owens for their loving and compassionate care.

He will be missed by all who knew and loved him. Goodbye Dad, you were such a gentle loving man with a great smile and a bit of stubbornness. Mom and Dad, you will forever be in our hearts