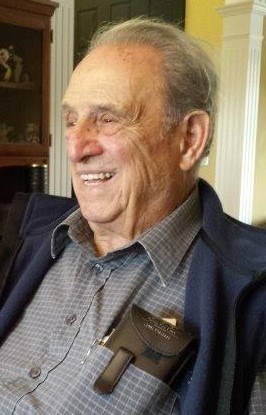 It is with heavy hearts that we announce the passing of Elmo Biagioni on Feb. 19, 2019, at the age of 93, at the Marjorie Willoughby Hospice in Kamloops.

Elmo was born in Penticton on Aug. 27, 1925, to Rose and Nicholas Biagioni. He spent his early years exploring the hills and fields near his home. When Elmo was 17 years of age, he enlisted with the Royal Canadian Navy and took his basic training at HMCS Cornwallis, N.S. and bravely served his country during the Second World War from 1943 to 1946.

After the war, Elmo returned to Penticton and worked as a plasterer and stone mason. In 1948, during a visit to Kamloops, he attended a dance and met the love of his life, Evelyn (Sandy) Alexander. They married on Sept. 17, 1949, and settled in Penticton where their daughter Cheryl-Ann (Sherry) was born in 1950.

In September 1951, Elmo began his career as a conductor with the Canadian Pacific Railway, and he moved his family to Kamloops where their son Robert was born in 1953 and then son Mark in 1969. Elmo was a hardworking and dedicated employee with the Canadian Pacific Railway for 37 years. During this time, he made many longtime friends and had countless tales to tell of his adventures on the railway. He retired on Feb. 1, 1988. In 1959, Elmo and Sandy bought a two-acre parcel of land on Valleyview Drive and proceeded to build their home.

Elmo took great pride in his yard and manicured lawns and worked tirelessly in his large vegetable garden and extensive flower beds even after turning ninety. Elmo was an avid outdoorsman and especially loved fishing, hunting and tying flies. He volunteered for many years with the Kamloops and District Fish and Game Association and in March 2007 was awarded a Life Time Membership. He loved spending time with his numerous friends and family and hosted many a barbeque in the family backyard.

Elmo was a devoted husband, father, grandfather, great-grandfather and friend and was always there to lend a helping hand for those in need. He will always be remembered for his great sense of humor, huge goofy grin and great laugh.

The family would like to extend their gratitude and appreciation to Dr. Loland, the nurses on 7 North at Royal Inland Hospital and nurses and volunteers at the Marjorie Willoughby Hospice. Thank you for your loving care of Elmo and support.

A Funeral Mass for Elmo will be held at the Holy Family Parish, 2797 Sunset Drive, Kamloops on Saturday, March 2 at 10:50 am. A reception in the church hall will follow the service. A family interment will follow at the Hillside Cemetery.