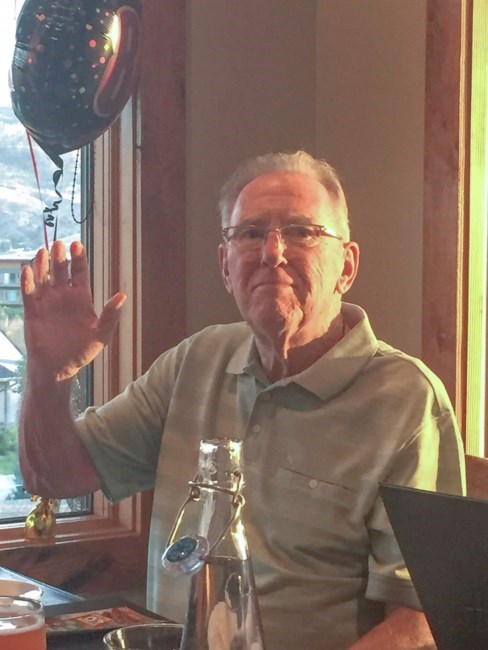 Born on Aug. 31, 1936, in Edmonton, John is lovingly remembered by Bev, his wife of over 56 years, his daughters Cathy Elliot and P.J. Kenzie and his sister Maureen Olson. John enjoyed watching his daughters and their husbands’, Alistair and Aaron, raise his grandchildren Jim, Margaret, Cooper and Thomas. John took every opportunity to tell his grandchildren how proud he was of them. He is dearly missed by all.

John was raised on an orchard in Penticton. His love of fruit trees and life near the water followed him all his days. In the early 1970s, John and his family had a place of their own on the South Thompson River. He loved tending to the cherry tree and the rest of his property dressed in his trademark faded swim trunks and worn-out gum-boots. He was always happy to lend a neighbour a hand.

John was fond of cats, often owning more than two at a time, which were loved deeply but named with little imagination; at least three were named Sam.

As a young man, John served in the reserve army as a cadet. He often fondly recounted learning to drive a Sherman tank. John undertook numerous volunteer activities throughout his life. He served as a board member for the B.C. Wildlife Park in its early years and the Kamloops Senior Citizens’ Railroad Society. He was also involved with community projects through the Kinsmen and Rotary clubs as well as with the local Sun Life offices.

John is remembered by his family as a hard worker and dedicated provider whose first concern was always the welfare of his wife and daughters. His sense of humour is the first thing mentioned by many who knew him. He spent over 50 years as a Sun Life agent selling life insurance in Prince George and Kamloops. It allowed him to do what he loved best, visiting and caring for people. Some of John’s favourite activities were boating on the river, fishing, golfing, curling and helping friends make wine and sausages. John loved having a conversation over a cup of coffee or a plate of french fries. He had an amazing way of making you feel like you were the most important person in the room.

John’s family is grateful for everyone who made a positive impact on his life, particularly the caregivers who assisted him through his later years. Joanne Bartman was his friend and walking companion. Comfort Keepers who were always there when needed. John enjoyed the outings to Ponderosa Day Program. Ponderosa Lodge eased his transition into care. Dr. Sigalet’s care, compassion and guidance enabled John’s family to plan for a peaceful passing.

Special gratitude is reserved by John’s family for the staff, volunteers, residents and family members at Pine Grove Care Centre. Their love and support was greatly appreciated. John loved Pine Grove’s home-cooked meals, beautiful gardens and good company for a year and a half before his passing. He was especially fond of Pine Grove’s music program.

An opportunity for those who knew John to gather and remember is being planned for this spring with details to be announced. Until then, make a connection and don’t leave a kind word unsaid, just as John would have wanted.