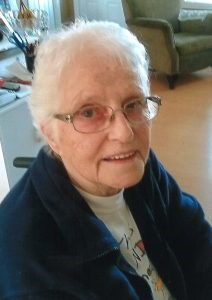 It is with great sadness that the family of Winnifred “Audrey” Golt announce her passing on Friday, Feb. 7, 2020, at the Pine Grove Care Centre.

She will also be greatly missed by her sister Valerie Llewellyn, nephew Dan Llewellyn and his family, Ron’s family in Australia and her best friend of 70 years, Sylvia Zander. Audrey was looking forward to the birth of her first great-grandchild, Baby Korany.

Audrey was born on May 12, 1935, in Vancouver, B.C. to Joseph and Winnifred Parker. She grew up in Vancouver and graduated from Britannia High in 1953. Audrey became a Key Punch Operator for BC Electric and then IBM in Vancouver.

In May 1961, Audrey took the ship Oriana from Vancouver to Sydney, Australia to work for IBM. There she met Ron, who unbeknownst to them, boarded the same ship in L.A. They became pen pals after Audrey returned to Canada. This long-distance romance culminated in 1965 when Audrey returned to Sydney.

Audrey was a stay-at-home mom while her children grew up. Family was her first priority and she always supported her children in their activities whether it was music or sports. There was always fresh baked cookies around and lots of hugs when needed. Two weeks every summer, Ron and Audrey would take the family camping and fishing, most often to Loon Lake, with many wonderful memories being made during these trips.

With her children grown, Audrey ventured back into the workforce to become a cashier. She did this until grandchildren came along, and she became an important part of their lives with babysitting, going to school concerts, sports events and every celebration.

In her spare time, Audrey loved gardening, baking, sewing, knitting, playing cards, travelling, fishing and moving. Whenever you would go to visit, she’d put out the tea and cookies.

The family would like to thank Dr. Howie and the staff at the Pine Grove Care Centre for the wonderful care during Audrey’s stay, and for going above and beyond for the family during Audrey’s last days.

No service by request. A private family get together will happen in the late spring.