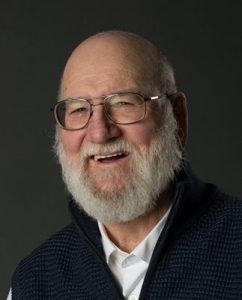 He was born on Nov. 3, 1939, in Vancouver. Alan retired from TRU (formerly Cariboo College) in 2006 where he was an electronics instructor since 1972. He received an Educator Emeritus in 2006. Many appreciative former students have kept in touch. Alan continued his connection with electronics students at Skills Canada until his stroke in 2015. With Skills, he travelled to every province and to Japan, Finland, England, Brazil and Germany.

His other love was 3rd Kamloops Boy Scouts. He retired from that, again, at 75 years, when he had the stroke.

Alan is survived by his devoted wife of 23 years, Hazel; his two sons Joel (Heather) and Nathaniel (Amanda); and Joel’s children Dylan and Jacob. Twenty-three years ago, his loving family grew to include three more children, Allan (Cherri), David (Leah) and Jenny. David‘s children are Ashley, Kaitlyn, Rylan and Alyjah.

He was preceded in death by his parents Harry and Marjorie. Also, the death of his son Chad was heartbreaking.

The Celebration of Alan‘s life will take place at 2 p.m. on Saturday, March 16 in the Kamloops Funeral Home, 285 Fortune Dr.

Flowers gratefully declined but should friends so choose, memorial donations may be made to Scouts Canada or the Kamloops Brain Injury Association through the B.C. Interior Community Foundation.