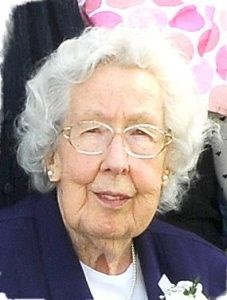 Martha passed away peacefully on March 7, 2019 at the age of 97. She was predeceased by her husband Charles Edward Hannaford and her brother Jack McNair.

Martha was born in Burnaby Lake, B.C. on Jan. 4, 1922, to Clifford and Agnes McNair. She and her brother grew up in the close-knit clan on the West Coast. After working summers in the kitchens of the Wigwam Inn and Emerald Lake Lodge, she graduated from Chilliwack High School and went on to Vancouver Normal School. Graduating with her teaching credentials including certification in handwriting from HB MacLean, Martha returned to Sardis to teach. Summers were spent at Victoria Normal School and the University of Victoria increasing her teaching credentials.

Soon after marrying Charlie, the family moved to Kamloops where Martha was active in the Valleyview Ladies Auxiliary of the Kamloops United Church. Not long after, the family moved to Victoria where Martha restarted her teaching career first as a kindergarten teacher at Esquimalt United Church, then as a substitute teacher in the Greater Victoria School District, then as a teacher at Fairburn Elementary School.  After retiring, she was active in View Royal Women’s Institute, Rebekah Lodge, and various church groups. In her latter years, Martha moved to Kamloops to be closer to family.

As a committed seeker of knowledge, Martha kept up with current affairs, read a lot, travelled some, and continually encouraged everyone around her to learn new things and grow. In Sardis to Victoria, she was known as the Maypole lady as she taught many classes of students the art of folk dancing, especially the Maypole.

In lieu of flowers, a donation can be made to a charity of your choice or St Andrew’s Presbyterian Church in memory of Martha.