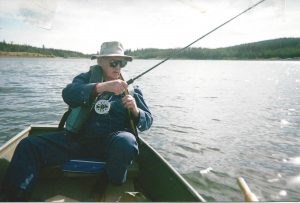 We are saddened to share the news of the passing of our wonderful husband, father, grandfather and great-grandfather. Dad slipped away from us in the early hours of Aug. 17, 2018 at the grand age of 95.

Dad was the eldest child of Albert and Minnie Harbidge and was born and raised in Sperling, B.C. He and mom first met in 1934 and grew up in the same neighbourhood. When Dad went away to join the army their love blossomed and they courted during the war years. They married Aug. 9, 1947. They were lifelong partners in every way.

Dad was a jack of all trades and a master of many. He joined the Canadian Army and was part of a special unit that worked along the B.C. coast to watch for approaching enemies in the Second World War. Dad then served with The Joint US/Canada Special Forces as a Paratrooper. He was a professional photographer in Abbotsford in the early '50s and continued this talent as a hobby for the rest of his life. In 1954, Mom and Dad moved to Red Lake near Kamloops; Mom to teach at the Red Lake School and dad to work in a lumber mill. They moved to the Tranquille Valley in 1956 to become ranchers. This valley ranch, the Bar DT was to be their home for many years as they raised their family. Dad logged in the area to make ends meet while he learned to be a rancher. In 1973, serious back issues made it impossible to ranch any longer so Mom and Dad moved to Parksville on Vancouver Island. There, Dad became a land developer and builder. Like everything in his life, he took it on full tilt. They moved back to the Kamloops area in 1984 and settled in Pritchard, where Dad built their dream retirement home. They moved into Kamloops in 2006. Over the years, Dad volunteered for many community programs and committees. His restoration of the Chase Museum is one of many projects.

Dad left us with his carefully kept diaries, photographs, collections of memorabilia and lovely stained glass lamps and windows. He was an accomplished fisherman and spent much of his adult life on the ocean, streams and lakes.

Dad’s greatest gift to us all is his fierce and enduring love for his wife and family.

Donations in lieu of flowers can be made to the Red Cross for forest fire relief at www.redcross.ca.