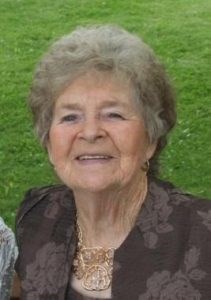 Marjorie “Jeanne” McDonald passed away peacefully, surrounded by family, on Tuesday, Sept. 3, 2019, at the Overlander Extended Care Hospital in Kamloops.

Jeanne was born in Prince Rupert. The second of five children born to Roy and Estelle Lancaster, she grew up mostly in Hazelton, where her father was station agent for the CNR. As a young woman, Jeanne continued the family railroading tradition by becoming an office employee for the CNR in Smithers. Before long, she was noticed by young telegraph operator named Don, and the rest is history. Don and Jeanne remained together for the next 66 years.

Jeanne moved with her young family to several railroad towns; Smithers, Prince George, Edmonton, Winnipeg, and finally Kamloops, where the McDonald’s settled down for good in 1972. Jeanne worked happily as a manager in the jewelry department at Sears from 1972-1987. For many years she spent her summer months golfing at the Kamloops Golf and Country Club and her winter months on the ice at the North Kamloops Curling Club. Most of all, Mom loved family gatherings, where everyone was welcome, and Sunday dinner was always delicious.

Jeanne was predeceased by her parents Roy and Estelle Lancaster, her brothers Norman and Art, and her sister Beth. She is survived by her sisters Maureen and Marg (Gary) along with numerous nieces and nephews.

The family would like to sincerely thank the staff at Ponderosa and the Overlander Extended Care Hospital for their many acts of kindness and care during Mom’s time there.

Flowers gratefully declined. Memorial donations in Jeanne’s memory may be made to the Alzheimer’s Society of BC or the Heart and Stroke Foundation.

The Funeral Service will be held at 1 p.m. on Saturday, Sept. 21 in the Kamloops Funeral Home, 285 Fortune Drive.