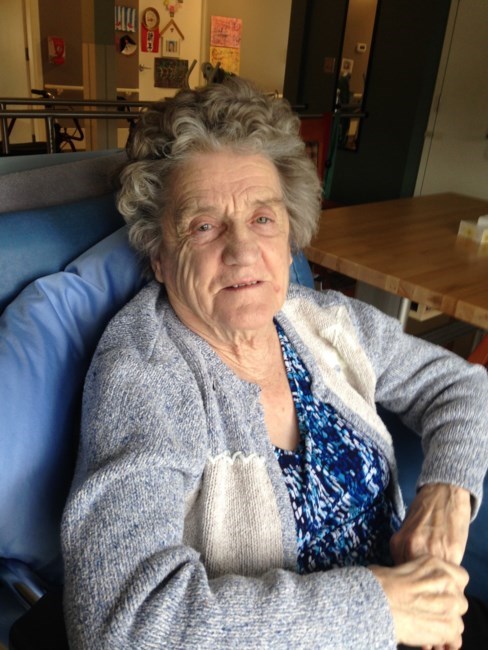 She is survived by her daughter Diane (Grant) Hoffman and their children Kari Lynn (Jeff) Dundass and Bryan (Cindy) Hoffman and her son Keith (Shelley) Ogilvie and their children Brett (Megan) Ogilvie and Michelle Ogilvie. She is also survived by her seven great-grandchildren William, Tyson and Wyatt Dundass, Deo and Everett Hoffman, Mia and Ava Ogilvie.

She was predeceased by her beloved husband Bill Ogilvie in 2004.

Pam was born and raised in Vernon. She attended the Keddleston school with her siblings and her future husband and his siblings. After her years in school she worked as a nanny and then was employed at Hunter's Store until she married Bill in 1955. She moved to Kamloops where they started their life and family together.

Pam and Bill were partners in every endeavour they embarked on throughout their 49 years together. In the early years they built a cabin on the north side of Kamloops Lake where many happy family memories were made. Then in 1967 they started their cattle ranch in the Long Lake area south of Kamloops. This was a love and passion that they both would continue for the rest of their lifetime.

Before Bill retired from the tire business in Kamloops, Pam held the fort down on the ranch ensuring that the animals were all cared for. She could often be seen using her snowmobile with the trusty sled behind it feeding the cowherd in the winter and riding her horse to check cattle in the summer. Pam loved her horses and dogs and even into her late seventies would saddle her horse, call her dog and take off for a ride in the grasslands and forest. Pam and Bill's relationship was a true partnership and after Bill "retired" in 1980 from the tire business, the two of them worked together every day, all day as they continued to develop their cattle ranch.

After her husband died, Pam continued to work every day on the ranch until her health finally slowed her down; however, this provided her even more time to bake cookies and fresh bread for her family and friends. Pam, or GG as lovingly known by her great-grandchildren, will always be remembered for her love of family and total commitment to put the needs of her family and friends first and foremost at all times.

The family wishes to express its deepest gratitude to the staff at Gillis House in Merritt who provided Pam with her "home away from home" for the past few years. Their compassion, kindness and caring made her last few years special.

In lieu of flowers, donations in Pam's memory can be made to Alzheimer Society of BC, Box 277 Station Main, Kamloops, BC V2C 5K6. There will be no formal service by request.

The family wishes to sincerely thank those friends who have extended their condolences to the family. Until we meet again mom, when the chores are done.