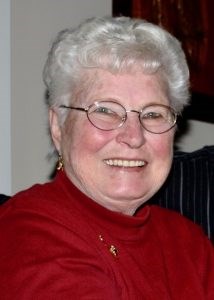 It is with great love and sadness that we share the news of the passing of Alice Shelest. Alice passed away on Nov. 1, 2019, in Kamloops from complications in the final stage of Alzheimer’s.

Alice was born Lesia Olive Sorochan Aug. 17, 1930, in Lamont, Alta. to Ukrainian Canadian parents. As a young child, starting school was difficult for the shy young girl as she spoke little English. Her family moved a few times but she found her ground in Prince George, along the way attending business college in Edmonton and serving as a civilian member stenographer of the armed forces. She met Frank in Prince George, marrying in 1953 and they were blessed with their two children.

The family relocated to Needles, B.C. in 1957 and to Chase in 1959 where they stayed for many years to raise their family, living an active life until they found the need to move to Kamloops in 2014.

Mom was a fabulous homemaker, wife and mother. She was a great cook, gardener, crafter and sewer. Many will remember her decorating their wedding cakes, buying her amazing petit point and viewing award-winning entries to area fall fairs.

Although she had a busy home life, she worked alongside Frank in their endeavours involving the community, Lady Lions, Lions, the Curling Club, Arthritis Society, Chase Queen’s Committee and the Salute to the Sockeye. Alice was a charter member of the Chase Lady Lions and one of the first five women to be inducted into the Chase Lions Club. She earned community recognition as Chase Citizen of the Year in 1998. Many Lions awards made her proud and you would rarely see her without her small Lions collar pin.

Alice had a strength and resilience that bode her well through her life and she would never back down from a planning challenge involving family or community event. She enjoyed and valued the ‘coffees’ with friends and neighbours and the travels she and Frank took. Offering particular peace were the short but meaningful times they spent together at Lions' conventions and their intermittent camping trips.

Alice will be missed by her loving husband of 66 years, Frank; their children Sandy (Glenn) Vogstad of Kamloops and Rob (Sherree) of Princeton; her grandchildren Lee (Yuki) Vogstad, Tessa (Scott) Cooper, Jen Shelest and Nikki (Brad) Wutke; and great-grandchildren Lily, Dylan, Leland, Emily and Noah. She was predeceased by brothers Robert and David and survived by her older brother Walter (Lucy) and sister Marie. Alice was so lucky to have her many in-laws as best friends. Many nieces and nephews will remember her smile and loving nature.

The family would like to thank the staff of Kamloops Seniors Village for their care and understanding of Mom’s needs.

In lieu of flowers donations in Alice’s memory can be made to the Alzheimer’s Society or Chase Lion’s Club, Box 12, Chase, B.C. V0E 1M0.

No service at this time.