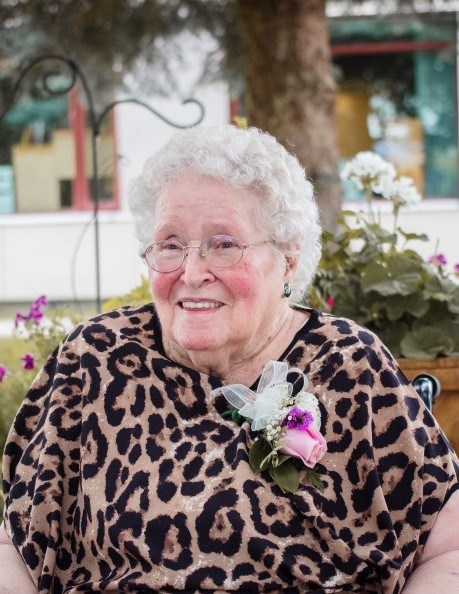 Throughout her life, Betty was guided by her commitment to her Lord, having publicly given her life to His service at 8 years of age. She had dreams of being a missionary as her Aunt and Uncle were in China and later Japan but her mission work was conducted in a less dramatic manner. She lived the example and shared her faith with people wherever she was at the time - bus stations, cafes, her home.

Betty’s resilience was proven over the years as many unexpected life changes took place. As a child, she suffered serious illness and without benefit of antibiotics, overcame the challenges that illness presented. As a child of the depression, Betty was well versed on frugality and “making do” as well as sharing with others less fortunate. Her grandparents were a huge influence on both her practical and spiritual life.

On Jan. 25, 1941, she married Ernest “Godfrey” White and began a life filled with surprises, challenges and love. Godfrey was a machinist when they married and had their first four children. While living in Kimberley, they took in the first of several children in crisis to provide stability and love until the permanent solution could be found. Then Godfrey was diagnosed with MS and Betty’s world shifted again. Godfrey decided to study for the Anglican priesthood - a far different church world than her Pentecostal community. Betty studied along with him to prepare herself to be a support to him and the churches he would serve. And their fifth child was born.

Betty learned the reality of raising five children, and another for a time, on the undependable salary of a priest in Godrey’s first parish in Nakusp. She grew her garden, canned fruit and became adept at stretching a dime into a dollar to meet the needs of the family. She worked part-time at a jewellery story, knitted sweaters, and converted the very old rectory into a home for the family.

After two years, Betty saw to the moving of her family once again when Godrey was called to serve at Holy Trinity Anglican Church in Grand Forks. The seven years in Grand Forks found her again nurturing a big garden, canning fruit, making clothes, and taking on the role of paper distributor for a few extra dollars. During these years, several additional young people were assimilated into the family, often with little to no notice. And Betty would set another place at the table, make up another bed and embrace their needs.

In 1966, Godfrey accepted a call to St Martin’s Episcopal Church in Moses Lake, Wash. where they spent the next 14 years. As the youngest of the children grew up, Betty went to work at Penny’s department store where she enjoyed interacting with customers and coworkers. She continued to support Godrey’s work and was as much a part of the church community as he.

In 1980, Betty and Godrey decided it was time to retire. They moved to Logan Lake, but instead of retiring, Godrey did some “fill in” work around the area which had Betty always accompanying him and often playing the organ for the services. Betty led a Bible Study in their home, and she continued to care for Godfrey as his health slowed him down. When Godfrey passed away in 1996, Betty continued to move forward and eventually to laugh and enjoy life again. In time, Betty recognized it was time to move to a place with less maintenance required and moved to Kamloops. And when the time came for even more care, she moved to the Jackson House in Ashcroft. Here she spent the last years of her life surrounded by people who cared for her in an exemplary way.

Betty is survived by her sister, Ruth (Roy) Daly of Vernon; daughters Marilyn Smoch of Krestova, B.C. Su Visker (Randy) of Moses Lake, Wash., Judy Bunkelman of Ellensburg, Wash; daughter-in-law, Phyllis White of Ashcroft, 20 grandchildren and 54 great and great-great-grandchildren as well as many friends, including Thelma Yuille of Logan Lake.

Betty was predeceased by her husband, Godfrey; her son, The Rev’d Evan Godfrey James “Jim” White; her daughter, Barbara Fox; her brothers, David and Russel Evans and three great-grandchildren.

These are some of the “facts” of Betty’s life. What cannot be expressed is her spirit. During the years of raising the family, Betty had to be the “practical” parent as Godfrey was not. It was only in her later years that Betty was truly able to “play,” and she did so well. She was game for dying her hair red for the “girl’s” weekend with her daughters, walking to support MS, taking her scooter to a store and buying flats of flowers so her daughters could plant her pots. Although her physical body slowed down, her mind did not and much laughter and joy-filled her room during visits with family.

She treasured her family - both those who came before her and those who were in the present. She remained generous of spirit and gradually became a tiny bit less practical. She loved and was loved. She will be missed.

A celebration of Betty’s life will be held at Logan Lake Christian Fellowship on Saturday, Feb. 1, 2020, at 11 a.m.

The family suggests that in lieu of flowers, donations may be made to the Rev. Jim White Memorial Bursary (for Desert Sands Community School), School District 74, PO Box 250, Ashcroft, B.C. V0K 1A0  attn; Steve Aie… or a charity of your choosing.