Retired geologist donates $300,000 to local faculty of science at TRU 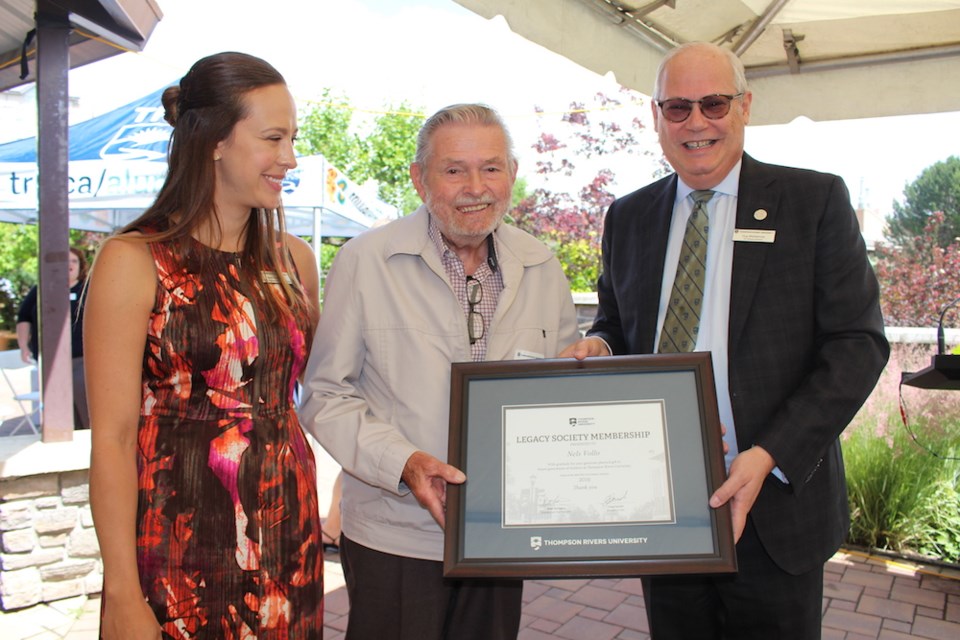 A $300,000 gift from retired geologist Nels Vollo will give new life to Thompson Rivers University’s (TRU) geology lab. The donation will allow TRU to upgrade 1980s-era lab space amid efforts to develop a full degree program in geoscience.

Vollo has long felt TRU’s location in BC’s Interior makes it a great place to study geology. He worked as a mining geologist and consultant in Kamloops for more than 30 years starting in the mid 1960s and was a founding member of the Kamloops Exploration Group.

“It’s a good place to have a geology department. Ideal, from my point of view,” Vollo says. “There’s spectacular physical geology all around and this is the centre of the mining industry—physically, this is really central.”

Dean of Science Tom Dickinson says Vollo’s donation will improve technology in the geology lab, particularly for introductory courses. Establishing better-equipped spaces on campus is a priority of TRU’s Limitless Campaign to raise $50 million by the university’s 50th anniversary in 2020. TRU has raised $42.3 million as of December.

“What we’re aiming to do is bring the geology lab into the 21st century with the kind of technology that didn’t exist when the program was established,” Dickinson says.

“Equipment will be fundamental in taking geology beyond the first two years and ensuring we can be positioned to develop a four-year Bachelor of Science in Geoscience.”

Geological work brought Vollo to Kamloops more than 50 years ago. After graduating from the University of Saskatchewan in 1950 he did geophysical work in northern Manitoba, then moved on to work as a geologist at several successive producing mines in Manitoba, Quebec, and Saskatchewan—picking up a master’s degree from McGill University along the way.

In 1966, he moved to Kamloops and managed exploration programs mostly in BC. He also initiated exploration work that led directly to the discovery of the Athabasca uranium deposits in Saskatchewan.

“Working in exploration, particularly, and even in mining, was like being paid for having a hobby. It was fun,” Vollo says.

Dickinson agrees TRU is a logical match for a geoscience program because of the widely varied and well-exposed geology in the Kamloops area. Degree programs in chemistry, physics and biology have developed faster because TRU had more faculty in those areas. Dickinson said a geoscience degree is on TRU’s wish list and would complement current programs.

“The power of the statement that individuals are willing to support it and have faith in it makes a much stronger case,” Dickinson says. “It’s a statement that Nels, in particular, sees value in what we’re doing.”

Vollo used a unique strategy for charitable giving, combining an immediate donation with a commitment to give in his will. This strategy is called planned giving. It’s possible to use assets other than cash to increase the impact of giving, provide greater tax savings and preserve wealth for family while supporting TRU.

TRU’s Limitless Campaign aims to raise $50 million by the university’s 50th anniversary in 2020.

Youth homelessness in Kamloops is real. Here’s how to end it
Nov 29, 2019 10:02 AM
Comments
We welcome your feedback and encourage you to share your thoughts on this story. We ask that you be respectful of others and their points of view, refrain from personal attacks and stay on topic. To learn about our commenting policies and how we moderate, please read our Community Guidelines.