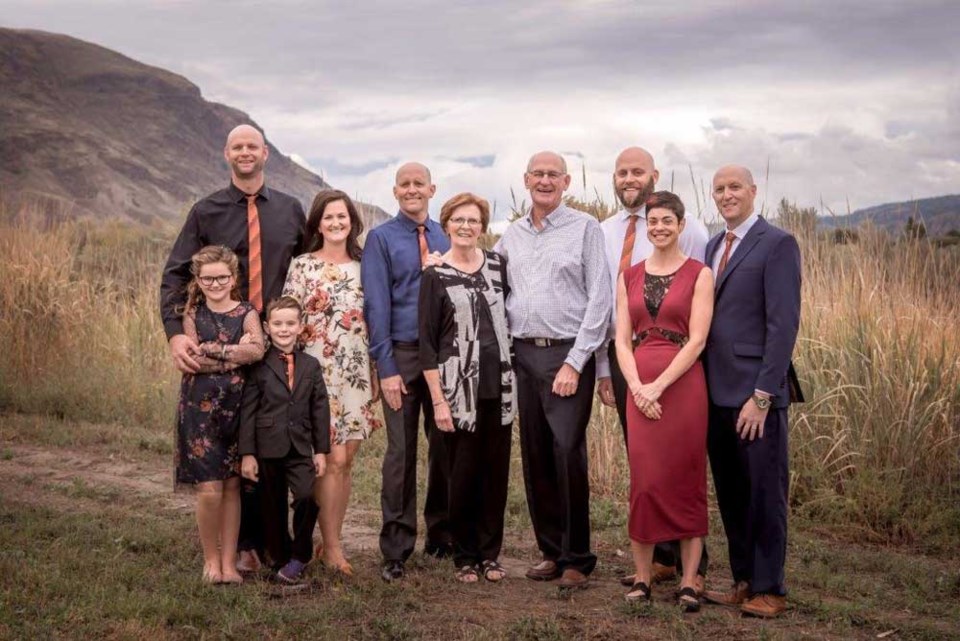 The RIH Foundation is proud to announce that the Ralph Emsland family will be donating $500,000 to the Royal Inland Hospital Foundation. Their gift will support the Patient Care Tower Project currently under construction at RIH, which includes a new helipad — of particular interest to the Emslands.

Ralph and Linda Emsland, both originally from Lloydminster, Alberta, moved to Kamloops in 1973 with their two sons Brett and Blake.

“We moved to Kamloops after vacationing here, mainly for the weather and because we liked the city,” Ralph explains.

Linda, a retired nurse, and Ralph, President of Westcan Aircraft Sales, have made Kamloops their home ever since. The family, as with most families in Kamloops and the region, has a connection to RIH; two more sons, Brad and Jeff were born at RIH. And as Brad, current Vice-President at Westcan Aircraft explains, “My daughter was born at RIH and growing up our family was always impressed by the level of service and care we received while at the hospital.”

The family also has a particularly strong connection with the current helicopter pad on the hospital grounds and the medivac program itself. In the 1980s, Ralph joined Seymour Air Ltd with owner, Abe Giesbrecht, flying charters and medivacs for the provincial government until the mid-1990s. Ralph started Westcan Aircraft in 1987, selling aircraft and parts, later branching into helicopter leasing. Westair Aviation Inc., their aircraft charter company, provides corporate charter flights across North America.

Although CC Helicopters was sold to Summit Helicopter’s parent company, The Ledcor Group of Companies, in 2014, the initial contract helped secure a 12-year contract for Ledcor with the provincial government in 2018.

“A lot of effort was put into the initial project and Trevor Moore, Bob Gray, Jake Ootes, Randy McLeod, and many others were instrumental in getting it started,” Ralph explains. “Although we are no longer directly involved in the medivac program, getting this project off the ground was a goal for us and one that we proud of having attained.”

As for the helicopter pad at RIH, Ralph explains how important it is to emergency services: “Helicopters were using the original heliport at the hospital for decades until it was deemed not to code by Transport Canada in 2010. After that, we were forced to use a pad at the city works yard in Mission Flats, which was not ideal as it meant that patients still had to be transported a distance by ambulance to the hospital. Local and provincial efforts allowed for the hospital helipad to be rebuilt so that we could once again land at least close to the emergency department.”

Although the current helipad at the hospital still requires a short trip by ambulance, the new pad, to be located on the roof of the Patient Care Tower, will eliminate the need for ambulance transport all together as patients will be taken via a dedicated elevator directly to the Emergency Room, saving time and lives.

“Kamloops and the surrounding area are very fortunate to have a rotary medivac program based here,” says Brad. “There are countless stories of the Bell 412 making a difference in people’s lives during their time of need, and I’m sure there will be many more. The rooftop helipad really does complete the program here in Kamloops.”

Currently, the air ambulance is available 12 hours a day, seven days a week, and is one of four dedicated rotary air ambulances in the province; two in Vancouver, one in Prince Rupert and the one in Kamloops.

The connection with RIH and the heliport are not the only reasons why the Emsland family has donated such a significant sum.

“We have been thinking for quite some time about making a donation to RIH Foundation,” Ralph explains. “The new Patient Care Tower with the helipad on the roof was the perfect opportunity for us to contribute to something we believe in, and in an area that has significant meaning to us. We hope that our contribution will be an example to the community and will encourage others, both individuals and companies, to also donate.”

“We’re thrilled to see this donation to the Royal Inland Hospital Patient Care Tower project,” says Meagan Hanson, RIH Health Service Director. “We feel the Patient Care Tower is going to transform the way health care is delivered in Kamloops and the region. The support the tower is receiving from the Kamloops’ community, in this case the Emsland family, is heart-warming and we are very grateful for their donation.”

If you would like to contribute to the RIH Foundation, either as an individual or family gift, or in memory of a loved one, please click here.

Here’s why Kamloops is B.C.’s capital of Dutch pancakes
Dec 27, 2019 1:50 PM
Comments
We welcome your feedback and encourage you to share your thoughts on this story. We ask that you be respectful of others and their points of view, refrain from personal attacks and stay on topic. To learn about our commenting policies and how we moderate, please read our Community Guidelines.